The name of this holy site translates to “middle of the sky”, “suspended in the air” or “in the heavens above.” Soaring above this breathtaking complex of Greek Orthodox monasteries that are amazingly built on top of towering sandstone rock pillars – is an experience not many people can claim. 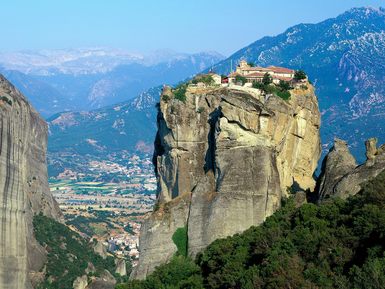 Located on the northwestern edge of the Thessaly near the Pindos Mountains in Central Greece, Meteora attracts visitors from the around the world that, Greek Orthodox or not, are impressed by the architectural feats to build these monasteries that have brought monks “closer to God.”
Your private flight will fly you around this one-of-a-kind UNESCO World Heritage site, right in between the enormous rocks that are celebrated as a geological phenomenon.
Meteora has been characterized as the second Agion Oros as it continues monastic traditions that have been alive for more than six centuries.   From your helicopter seat, you can watch as pilgrims and visitors climb up stairs and walkways to the top of these fantastic sky-high monasteries.  From the 24 monasteries today, six of them function and the 15 remaining are uninhabited.
All are a sight to witness from the sky.

To receive a detailed offer, please fill in the charter request form.

ABI’s experienced charter advisors will answer any questions you may have should you want to customize your tour.

More information on the airplanes and helicopters available can be found at the following links: aircraft for charter and helicopter for rent.