Why are helicopters so expensive?

The helicopter is a very complex aircraft with many moving parts. Also, it requires a great deal of engineering and research to design a helicopter. There is a very strict maintenance schedule to assure maximum safety and reliability.  The production rate of a helicopter is low due to its complexity, which keeps the price of each aircraft much higher than that of a mass produced vehicle such as the automobile.

What type of engine does a helicopter have?

Generally there are two types of helicopter engines:

These are similar to automobile engines and small-airplane engines. They run on high quality gasoline which is refined and filtered to be much cleaner than automotive gasoline. This type of fuel is called avgas and is typically 100 octanes (low lead).

This type of engine is usually called a jet engine. By design it is similar to the engines on a commercial airliner but just a bit smaller.
A turbine engine is preferred by medium to large helicopters because it can produce a large amount of power and is light weight. It is quite costly. Turbines use a type of fuel known as “Jet A,” which is similar to very clean kerosene.

How fast can a helicopter go?

The normal cruising speed of a helicopter varies on the amount of power available and its rotor system. The typical cruise speed for a two-seat trainer style is about 90-105 Mph and the five-seat turbine is about 130-145 Mph. Maximum speed in a Bell 206 is about 155 Mph.

What are the benefits of a helicopter?

Helicopters have the ability to take off and land vertically, hover in one place or fly at very low speeds and rotate 360 degrees while hovering. Those abilities give passengers can a panoramic view of remote or confined areas that are inaccessible by fixed-wing aircraft.

Helicopters are often called upon in medical emergencies and search and rescue missions because of their versatility. Many law enforcement agencies use them to track down stolen vehicles or chase criminals. Helicopters are also extremely valuable for fighting forest fires that are sometimes inaccessible by the ground.

How much does it cost to learn to fly a helicopter?

Costs depend on the model of helicopter and where you are located. The average training rate for a two-seat helicopter is approximately € 300 per hour. A four-seat training helicopter training program runs at € 300 per hour. The FAA requires a minimum of 40 hours of flight time for the private rating, but it is typically 45 to 55 hours. Training for a private helicopter private license may cost up to € 18.000 and for commercial license up to € 80.000.

What happens if the engine fails?

During an engine failure, the engine will automatically disengage from the rotor system. With the proper control input by the pilot, the rotor blades will continue to turn at normal operating speeds, allowing the pilot to make a fully controlled landing. This procedure is called an autorotation. Unlike a conventional airplane, which can’t fly at much below 50 Mph, a helicopter that has had an engine failure is able to touch down with little or no forward movement and in a relatively small amount of space. Usually, a parking lot or a side street should be able to do just fine.

Why do helicopters fly so low? 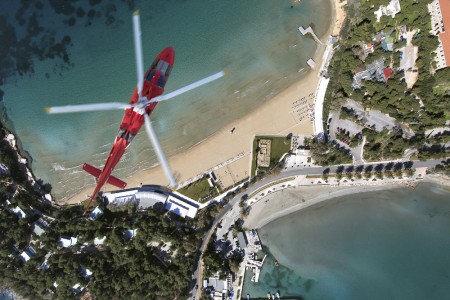 The helicopter’s unique capabilities serve mankind in many ways. One of those ways is flying close to the ground. The rules of flying allow pilots the discretion they need to derive maximum utility from the machine and safely accomplish their mission. Sometimes the weather is not as good as forecasted so to be safe and to comply with regulations, pilots maintain distance from clouds. Pilots are rigorously trained in making safe landings from various heights and speeds, and they know what combinations of speed and altitude are the safe.

The human perception of the height of moving objects of all kinds is a complex subject. So are the definitions of what low means. The main thing to know is that helicopters can be safely operated at all heights above ground, and pilots consider many things when selecting an altitude.

Why don’t they just fly?

Pilots select altitudes for a variety of reasons including weather conditions and the mission of the flight. It’s not unusual for strong winds to exist a few thousand feet up while surface winds are calm. Most airspace allows pilots to select the most efficient flight route. Areas near airports with airline flights allow less flexibility in route and altitude. Pilots in metropolitan areas like New York City, frequently fly as high as air traffic control (ATC) will allow. ATC is required to maintain specified physical separation of aircraft. Quite often helicopters you see are flying as high as they can. They have a job to do and are limited by other factors.

Is it fun to fly in a helicopter?

Another way to see it is that very few people become helicopter pilots and then stop. Many pilots who fly for a living retire from one flying job and go on to another. Many pilots that remain in good health keep flying past the encouraged retirement age of their company because they enjoy the job so much. New pilots benefit from their knowledge, poise, and experience.

Is it safe to fly in a helicopter?

Yes, it is safe. Some people have a mistaken notion that if a helicopter’s engine quits, the rotors will stop turning. Modern helicopters use a device much like an automobile clutch between the engine’s drive and the main rotor’s transmission input. It works automatically and mechanically to disengage the drive from the rotor when the engine slows rapidly, as in a failure.

They go by a variety of names, but it allows the aerodynamic feature called autorotation which allows the air flow past the main rotor to keep it spinning so the pilot can make a safe and controlled landing. Many helicopters these days have two engines and under many conditions can just keep flying if one fails and no longer drives the rotor.